Review as seen in the October Issue of FI Magazine 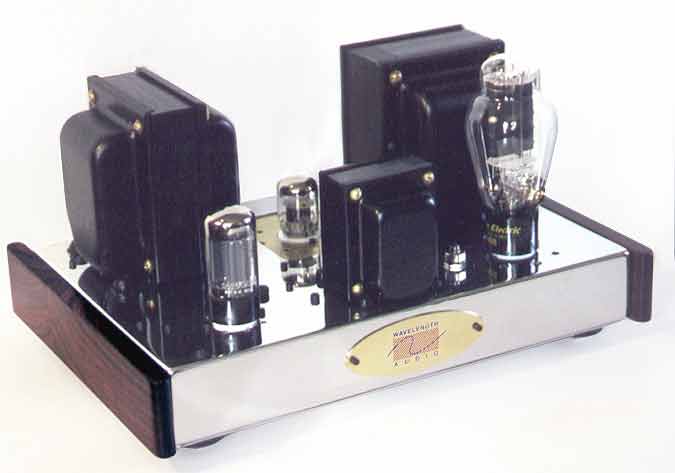 The Wavelength Audio Triton amp, S-E guru J. Gordon Rankin's newest design, comes in four configurations-the 300B (pictured above), the 300B Signature, the 2A3, and the 2A3 Signature. As you've probably guessed, the different models use either a 300B or a 2A3 as their (sole) output tube, the differences between the standard and Signature versions consisting in the number of amplification stages in either amp-two for the standard, a (more immediate and transparent) single stage for the Signature-the quality (and expense) of the tube sets provided, the transformer-the Signature's is 50% silver and has greater purity albeit slightly lower power-and the chassis-stainless steel or, in the Siggie, chrome plated copper.

Each amp has two more tubes in addition to its output tube, ergo the name Triton. The input/driver tube is a rare and special beast, indeed, a 437A triode-one of the most complex and expensive tubes ever made by Western Electric, designed for use in extremely critical applications requiring both ultra-low distortion and great drive capability. Apparently, Westrex has a cache of NOS 437s (which Western Electric last made in 1977), and is selling them off as it tools up to go back into production. The rectifier is a 5AR4 GZ34 which Gordon gets from a variety of sources. The remaining 300B (or 2A3) is, of course, the output, and any brand can be used with no adjustment of the amp. Mine are VAIC VV 300Bs, which have great extension and superb low-level detail resolution-a 300B for those who prize transparency and want to hear deeply into the minutely detailed information buried in recordings, rather than one that emphasizes euphony or warmth.

Rankin is not a single-ended designer who eschews the lessons of engineering and science. The guy knows electronics. The Triton Signature 300Bs I received are pretty darn flat (-1dB at 12 Hz and 20kHz, -3dB at 5Hz and 35kHz) and low in distortion (0.013% at one watt output, 0.85% at eight watts, 3.2% at 12.5 watts). Since the speakers I'm using, the AvantGarde Horn Trios, can put out 106 dB from one watt of input, the system sports effective distortion levels that give up little to high-tech solid-state rigs.

Though the Tritons are low-powered, single-ended triodes, what we hear from them is musically appropriate warmth and beauty-not single-ended euphony-with extremely high resolution and great transparency. These are not amps that glaze the music with an obtrusive sound or character of their own. That's important. It's easy to say, as many do in defense of single-ended amps, that high distortion is okay because it's "benign" second-order harmonic distortion, or because the amps clip forgivingly. Remember, though, that second harmonic distortion, which may be euphonic and "musical" on a female vocal or a solo acoustic guitar, can cross a thin line and become much nastier intermodulation garbage if an entire orchestra, say one hundred instruments, starts to cut loose on a powerful crescendo. With the Tritons driving the AvantGardes, that sort of muddy, undifferentiated sound, the thing that turns off many where single-ended amps are concerned, just doesn't happen. Resolution, accuracy, truthfulness-whatever you may choose to call the scientifically correct side of high-end reproduction-the Wavelengths deliver. On the "big" recordings that often can be the Achilles' heel of low-powered, single-ended triode systems, say Classic Record's superb reissue of the Carmen Suite, the sections of the orchestra remain separate and uncongealed; the brass roar rather than bleat, the violins sing rather than screech, and the tympani beat as well as rumble, when the Triton Signatures are driving the system.

In fact, the Wavelength Triton Signatures are, to the ear, higher in resolution (lower in distortion) than any other amps I've tried. They are simply extraordinary in their ability to dig out the tiniest details of sound generated by the recordings and components ahead of and behind them in the chain. The kinds of adjustments that can be hard, in many systems, to hear clearly and analyze confidently-the effects of minute changes in tracking angle, slight modifications of speaker position, or differences in top-of-the-line interconnects, for example-are readily apparent when the Wavelengths are in place. Nothing is masked.

The Wavelengths "grow" the sound from a base of silent purity (they are remarkably quiet-despite the extremely high sensitivity of the speakers, I have to turn the gain way up, even on phono, before you can tell the system is on at a distance of about five feet). Nothing is distorted, either, making sounds that are better differentiated, more characterful, more distinctively recognizable for their natural sources, than I've heard before. On Analogue Productions' marvelous reissue of Keep It To Ourselves by Sonny Boy Williamson, the title track includes a lot of finger-snapping. On most systems, we can easily tell that Williamson is providing his own percussion; there's no problem there. But with the Wavelengths, we hear-quite clearly, in fact-the sound of the fleshy area beneath the thumb and the way it damps the popping sound immediately after the initial transient. I've played this record dozens, maybe hundreds of times, but that sound has never before been so real and true. We simply get more of the information that tells us the pop is a finger snap-and couldn't be anything but a finger snap-than we've received before. We don't have to do any of the straining of ear, or analyzing with brain, that we usually have to do when listening to our stereos in order to grasp what's happening. On some of my older Thelonious Monk recordings, there's studio chatter I hadn't previously been able to hear; on all sorts of spoken or sung words, I can now make out what people are enunciating where I never could before. While the sound of the fleshy part of Sonny Boy's palm or Monk's comments to the control booth may not be very musically important, we know that the amps' ability to resolve that kind of information also results in resolution of-and the ability of the listener to hear and discriminate effortlessly among-the overtone structures of woodwinds placed right next to one another or the difference in height of choral singers up front and those on risers behind. You can simply hear everything through these amps.

The real glory of the system I'm now running, and of the Wavelength amps which are a key component of it, comes from their ability not just to tell the truth about sounds but to convey the beauty of music. That beauty, the sense that music, not lab measurements, but living, breathing music, is being made is the most powerful rationale for high-end audio. Sure it's great fun being able to tell when a trumpet player turns slightly away from a mic. It's fun, too, to be able to hear clearly the small differences among speaker cables. But it's more fun to be swept away by the power of brass or the delicacy of a pianist's touch when interpretation is being shaded just so. The greatest joy of listening to music being reproduced with the highest of fidelity is not just the getting of details but the getting of music's great and grand essence. The sonority of harmonic overtones, the physical sensation of rhythmic pulse, the visceral thrill of explosive dynamics, the emotion of shared communication, awareness of interpretive artistry-these become a whole that is far more than the sum of parts. I am captivated, not just by the amount and subtlety of the information I'm receiving as a careful listener, but by the sheer beauty and powerful emotion I'm enjoying as a music lover. It's hard, though, to find the words to capture that special feeling we audiophiles sometimes get when, finally, it all falls into place.

Late one night, after enduring the tedium of a cartridge change and those interminable adjustments of overhang, azimuth, tracking angle, and tracking force, I put on one my current favorites, Van Morrison's The Healing Game. As I listened I continued to make increasingly refined adjustments and by the time I got to the last cut (the title track), I had found that wonderful-and all too rare-combination that must have matched azimuth and VTA exactly to the cutting of the record.

There I was, right in that studio with Van the Man and his band. His sweet, rough voice ("Here I am again, back on the corner again, back where I belong, in the healing game...") riding the wave created by the rolling lower midrange sound of Georgie Fame's chording on the Hammond organ; the back-up singers, even the basso that before I could barely hear, singing their harmony lines ("Shooby-doo-wop, Bop, bop, bop, Shooby doo wop, Bop, bop, bop..." yeah, well, maybe you just had to be there for some parts), with detail so complete I could clearly hear the unique overtone structure of each individual voice; the tenor and baritone saxes next to each other, doubling each other, with each nevertheless remaining distinctly separate, both spatially and tonally; the other instruments (piano, drums, trumpet, basses electric and acoustic, guitars) swelling, receding, tinkling, floating, percussing, making music... I drifted away ("Sing it out loud, sing it in your name, sing it like you're proud, sing the healing game..."). The system, including its last component, this listener, was as good as it gets. In those moments, the expense, the fuss, the disbelief and ridicule of non-audiophiles, even the quirks of fellow audiophiles, didn't matter. Bliss mattered. And I had found it.

The system I'm listening to these days is so so musically engaging that I've a strong desire to just leave it alone and dig into my music. That's right. I'm satisfied. I could easily resist the usual reviewer's (and audiophile's) desire to try any and every new component that's become the subject of a buzz. That's never happened to me before.

Despite my enthusiasm, I want to note certain cautions. No system is flawless, including this one; it has limitations. And I haven't auditioned the wonderful Wavelength amps which are at its heart with other components. It's important that you understand the context in which I'm writing. But within that context, I've never enjoyed listening to music at home as much as I'm enjoying it now with the Wavelength Triton 300B Signature amplifiers and AvantGarde Trios.
The healing game, indeed. I've listened enough to "sound"; I've talked enough about components. Excuse me, but I think I just want to go play another record...

Fi: The Magazine of Music and Sound is a component that should be added to every sound system. Featuring the world's best writing on audio and music, Fi brings readers more of what really matters. For subscription information call (800) 779-HIFI (4434) or write to: